1911
Blaue Reiter was formed in order to secure exhibition space for artists seeking to express their individual expressions.  The title of the movement was coined by Wassily Kandinsky’s drawing of a blue horseman.  Kandinsky, Franz Marc, and Gabriele Munter were the key artists that started the movement in December 1911.  They had an exhibition that included several other artists such as Albert Bloch, Robert Delaunay, Elizabeth Epstein, August Macke and Henri Rousseau.  A second exhibit followed that was much larger which included the famous artists of Pablo Picasso, Braque, Klee and Goncharova. Thought it did not last long, the movement was significant in that it brought German Expressionism to its highest level of painting.  It also encouraged the idea of individual expression and not following any accepted values that might restrain an artist’s creativity. 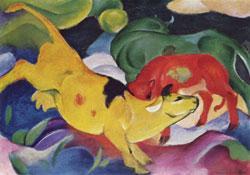