A turning point was made in European painting during the mid 1800s when a group titled the “Impressionists” started to use new scientific information regarding the physics of color in their paintings.  They paintings they created were completed by filling canvases with small touches of color that mirrored the impressions of light and color the artists saw outdoors.  The focus of the painting method was to stress an individual’s way of SEEING the subject matter.  The fleeting moment of seeing the subject matter  - its essence – was essential.  Most of the Impressionist paintings were full of color – tiny details were often not included. Examples of some of the Impressionist painters include: Pierre Auguste Renoir , Edouard Manet, Camille Pissaro, Edgar Degas, Alfred Sisley, Claude Monet and Berthe Morisot. Each artist of the group chose their own subject matter based on their preferences.  Degas, for example, chose to focus on horse races and ballet dancers.  Monet chose to focus on gentle changes seen in the atmosphere.  The movement sparked other smaller art movements, including: Pointillism, Art Nouveau and Fauvism.  Pointillism emerged from the idea of using small dots of color which then merged together the further the eye stood from the painting.  Seurat was one of the major forerunners of the movement.  Other artists associated with movements inside Impressionism include:, Paul Gauguin, Henri Matisse, Henri de Toulouse-Lautrec, Paul Signac, and Camille Pissarro.

Impressionism continued to influence many artists today in encouraging them to look at subject matter in new ways. 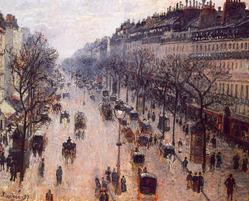 Example of painting by Camille Pissarro 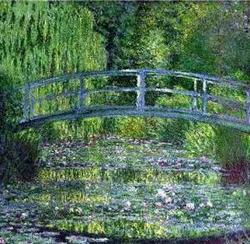 Painting completed by the famous Monet. He frequently painted this bridge, trees and flowers in his paintings.