An art movement begun in 1520 and ending around the 1600s.  The movement sprang up as a result of the solving of representational problems that artists had puzzled over for centuries.  During the Early Renaissance and High Renaissance artists observed from nature in order to create their characteristic styles.  As knowledge was learned to solve certain representational issues, artists were able to focus more on style than on nature to guide their particular tastes in artwork.  The result was a “manner.”  In the Mannerist paintings, several rules went out the window.  For example, artists allowed spaces in their work to be ambiguous, there did not need to exist a focal point, and figures were often manipulated through such things as distortions or unnatural twisting of the limbs to suit the taste of the artist.  Filled with allegories and colors that clash with one another, Mannerist paintings did not seek to bring serenity to the viewers, but rather a feeling of restlessness.  Key Mannerist artists include:  Andrea del Sarto, Jacopo da Pontormo, and Correggio 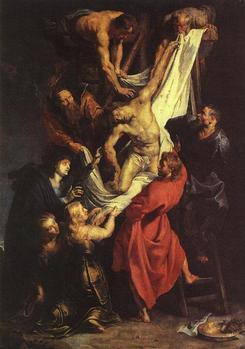 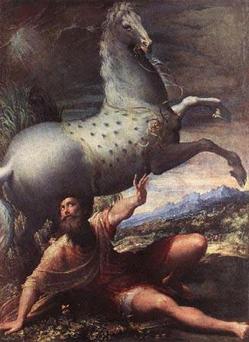 A Mannerist painting entitled, "The Conversion of St. Paul."