Optical Art is a term referring to sculptures or paintings that appear to almost vibrate because of their optical effect.  Using patterns and colors, artists of the movement were able to create visual effects that disoriented its viewers.  Key painters in the movement include Bridget Riley and Victor Vasarely. Two sculptors who used illusion of distortion to disorient viewers were Eric Olsen and Francisco Sobrino. The artists used what they knew about perceptive psychology to create their idealized versions of their intended results.  Other cousin art movements related to Optical Art include the Constructivist Art and Kinetic movements.  As it developed, Optical Art gained favor with the public; however critics were more skeptical of its operation in the art world.  One famous exhibit from the Optical Art movement was “The Responsive Eye” exhibit shown in the Museum of Modern Art in New York in 1965.  As a result of the exhibit, fashion designers and trendy street stores started to incorporate the style in their products.  Soon after, the term became a household name. 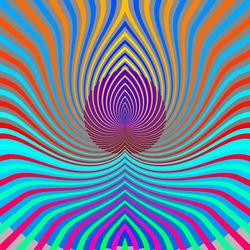 These are two examples of Victor Vasarely's artwork that used optical effects to achieve a disorienting effect. 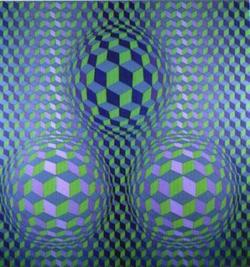