(1880-1920) Post Impressionism refers to an extension of Impressionism that embraced not limiting itself to just the style characterized by Impressionism.  Roger Fry coined the term for artists that included among others Georges Seurat, Paul Gauguin, Vincent van Gogh, Henri de Toulouse-Lautrec, and Paul Cézanne.  With the exception of Van Gogh, they were French artists who had participated in Impressionism but gradually had moved into their own unique style of creating artwork.  Each expressed theirselves differently, but they all stayed true to using the pure, bright colors and short brushstrokes of Impressionism.  Post-Impressionism played a significant role in much of the artwork created in the early 1900s and beyond.  Most Post-Impressionists would exhibit at the same time, however each tended to paint by himself.  It was Van Gogh and Gauguin that sought to fill their artwork with their own spiritual and individual creativity.  Gauguin eventually rejected naturalism in favor of what he saw as a more truer aesthetic in art which involved a thick outline and flat color in his paintings.  He painted Tahitians using harmonious, often unusual, color combinations.  Van Gogh is credited with sincerely using his art to convey his passionate emotions.  He started out using the short brushstrokes of the Impressionists, but eventually turned to wavy, alive lines of color that were distorted.  His paintings were filled with brilliant color and heavy paint.  Not long after Post-Impressionism, Fauvism and Cubism came into play which used Post-Impressionistic ideas of creating intense emotions through the use of color and manipulation of line.  Other key Post-Impressionist painters include Auguste Rodin and
Amedeo Modigliani. 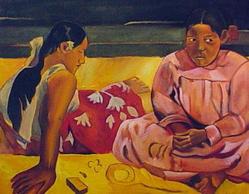 Example of one of Gauguin's paintings of the Tahitians. He moved to Tahiti and lived with the natives there. 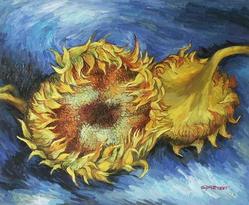 Example of one of Vincent Van Gogh's famous sunflowers. His paintings are often filled with vibrant color and rich texture.