An art movement begun by Holman Hunt and John Everett Millais.  They formed a group of artists that desired to emulate painting styles used before the time of Raphael.  The initial group of Pre-Raphaelites included: Rossetti, his brother William, James Collinson, Thomas Woolner, Hunt and Millais.  The members focused on studying medieval scenes and using powerful symbolism in their work in the desire to inspire others to thoughts of nobleness.  At first critics thought that by the name the group was insinuating that they were better artists than Raphael.  However, critic John Ruskin saw in their ideas a good thing which helped the group to succeed.  The group eventually broke up when Millais' 'Ophelia' (1850-1851) was exhibited with great success at the Academy Exhibition.

Another Brotherhood was created that was founded in Oxford.  The group, made up of Rossetti, William Morris and Edward Burne-Jones, created paintings filled with ethereal beautiful women.  Millais and Hunt went off in their own individual directions, though they continued the practice of following the ideas of the first group.  Other artists caught onto the ideas of the Pre-Raphaelites such as Maxwell Armfield and Frank Cadogan Cowper.  Eventually movement fizzled out and other art styles replaced it around the 1920s.

A painting completed by Holman Hunt, one of the founders of the Pre-Raphaelites. 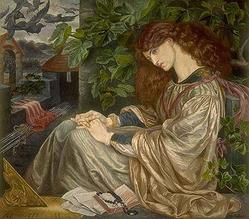 A painting by Rosetti, one of the members of the Pre-Raphaelites.