An art movement begun in the 1700s in France.  During this time period, the middle-class was becoming more affluent and influential.  When Louis XIV died, the wealthy families in Paris began to take a great amount of interest in style.  The particular style that developed was called Rococo, and was mostly used for interior decorating.  The term Rococo is from the French word “rocaille” that translated means pebbles.  It is a term that relates to the shells and stones used to embellish the interior of caves.  Shells, therefore, soon became the main motif in the new style.  High class women tried to outdo each other to decorate their houses with the most intricate decorations for their homes.  The style, therefore, mainly catered to women’s tastes and preferences.

One of the artists who rose up during the period was Francois Boucher.  He was a lace designer, painter and engraver.  He became popular for his feminine landscapes and mythological paintings.  Some of his clients included the Queen of France and the influential Mme. de Pompadour, Louis XV's mistress.  It was Boucher’s style of work that came to dictate the ideal style shown in Louis XV’s court.  Gentle hues and pleasant forms characterize his light subject matter of goddesses, cupics, and shepherds.  The Rococo period is often viewed as the last chapter in the Baroque period.  Besides Boucher, other important artists of the Rococo era were William Hogarth, Giovanni Battista Tiepolo, Angelica Kauffmann, and Giovanni Antonio Canaletto. 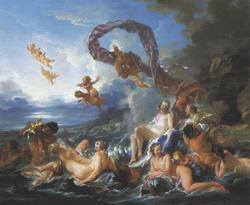 One of Boucher's paintings filled with women and cupids set against a light blue sky.