A number of realist paints from the United States began making artwork that started the Ashcan School.  The catalyst for the movement was Robert Henri.  Henri, along with newspaper illustrators Everett Shinn, William Glackens, and John Sloan, worked together to create was they considered the realities of life as being beautiful and thus true art.  Their artwork featured rough urban life, the poor and the disenfranchised in the United States.  Their style was loose and not like the refined art pushed in American art academies.  Paint was applied thickly and brushstrokes were textured over the canvas.

As time went on, these artists along with Ernest Lawson, Maurice Prendergast, and Arthur Davies worked to created a self-organized and self-selected exhibit that created history in 1908 because it defied the academies and was seen as a symbol of rebellion against the typical art of the day.  The exhibition acted as a model for the famous exhibit The Armory Show of 1914, because it did not include prizes or a jury. 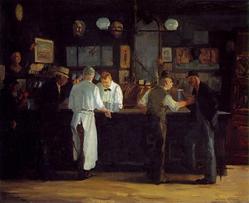 Both of these works are typical of the movement's somber, more muted palette and scenes of everyday living. 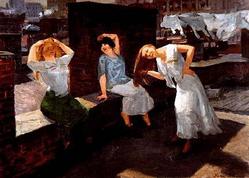 The movement was called the "Ash Can" because the artists stressed scenes from urban life which is what they considered to be real art.