In the 1950s and early 1960s artists grouped together to create dramatic and power-filled images portraying scenes in Florida.  A major influence on the group was A.E. “Beanie” Backus, a Florida naturalist.  The group used materials such as masonite, upson board, canvas board and canvas to create their work.  Rather than going through the traditional route of galleries, the artists sold the work themselves along highways for a number of years. 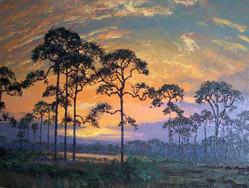 Example of one of A. E. Backus paintings. This one is called,"Fire Sky"