An art movement that filled the art galleries in the 1970s and 1980s in both the USA and Europe.  The term Neo Expressionism refers to a group of varied artists who decided to start painting objects and the figure in a more recognizable way than was the current norm at the time.  The movement was a reaction against the stark, abstract intellectualized art made in the 1970s.  Thick impasto and the stress on big heavy forms that related to historical narrative regarding allegory, myth and symbolism marked the artwork. The movement was propelled along by advertising methods, marketing techniques and galleries seeking to promote the artwork.  Underlying all the artwork was an indifferent, sometimes cold emotional tone that reflected the values of the day, as well as to the actual representation of how objects appeared.  The artists used a unique approach to their presentation of objects; the objects communicated a sense of loneliness, indifference and tension.  The traditional way of composing a picture was thus put away, and they artists chose not to use rich or vivid color harmonies.  Key artists of the period included: Julian Schnabel and David Salle from the USA, Sandro Chia and Francesco Clemente from Italy, and Anselm Kiefer and Georg Baselitz from Germany. Because of its commercialized side and the encouragement of the public to purchase the art, as well as the actual questionable quality of the work, Neo-Expressionism proved to be rather controversial as people strove to understand how to embrace or react against the message and implications it brought.

Two of Sandro Chia's artworks. This one is entitled, "Boy with Feelings." 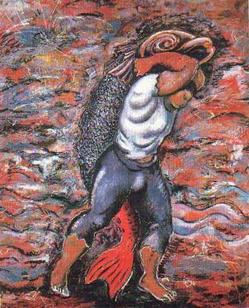