(1957-1972)
Artists impacted by the 20th century avant-gardes, Lettrism,  Surrealism, Dada, Marxism ideas formed a small group that came to be known as the art movement Situationism.  The  “suppression of art” was the prime focus of the Lettrist International group.  They, like the Surrealists and Dadaists, wished to fuse together culture and art together, and have them be united in people’s everyday lives. The Situationist International was created in 1957 and spread its ideas throughout Europe into the 1960s.  The group was interested in change – both political and social.  Eventually, the group segmented into three groups, including the Antinational, the Situationist Bauhaus, and the Second Situationist International.  Asger Jorn and Guy Debord were important developers of the movement.  They and others worked to make culture and the totality of a person living in the capitalist system to see art as part of their daily living.  Kronstadt, the Makhnovists, and Spain were major influences of the group.  As the group developed, they made claims that they were not interested in a leadership system or followers of the group; however, in practice, any dissenting minorities were expelled from the group and they were careful about who was allowed to join the group.  In 1972 the first Situationist International fell apart. 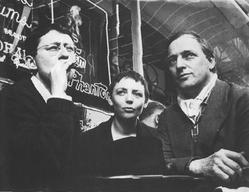 A picture of Michele Bernstein, Asger Jorn and Guy Debord together in Paris.