Postmodernism refers to a wide spectrum of progressions in the fields of philosophy, architecture, art, literature, and culture, and critical theory that grew in relation to modernism.  Postmodernists were disillusioned with the repercussions of WWII.  They stayed away from anything that might lend itself to containing a focused hierarchy or organization element.  Rather, they attached themselves to the idea of being contradictory, diverse, being unified, and being complex in the extreme.  Many significant changes were happening socially, culturally and economically in the 1960s.  Postmodernism in art stemmed from these changes.  In fact, the term was first officially used in 1949 to explain the discontent felt in the architecture of the times, which in turn led to the postmodern architecture movement.  The movement then spread to other movements – including art. In relation to art, Postmodernism is an encompassing term that refers to a range of cultural attitudes that embrace the idea of approaching art in a more spontaneous, more populist way.  It covers a wide spectrum of art and artists.  More than anything, it is more like an attitude and approach to creativity rather than a specific manner or style of artwork.  Examples of well-known Post Modernist artists include: Jasper Johns,Frank Stella, Donald Judd, Bridget Riley, and Joseph Beuys. 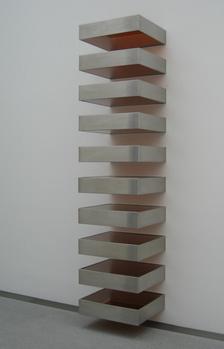