(1800-1850) Romanticism represented a shift of focus away from classical forms, and placed the stress on spiritual and emotional themes. movement first started in England and Germany in the 1770’s and gradually spread around Europe and the United States in the early 1800s.  The movement originated as a reaction against Neoclassicism due to changes happening around the French Revolution and Napoleonic time period.  Rather than focus on the Neoclassicism scheme of things such as idealization, logic, balance, and harmony, Romanticism chose to stress things such as one’s emotions, imaginative ideas and freedom.  Being unstructured and not being hampered by any set rules were key ideas in the movement.  Nature and a dedication to studying how people think and feel were important.  An underlying theme throughout the movement was taking into consideration a person’s inner struggles and thoughts.  Subject matter and ideas involved the medieval era, folk cultures, occult practices, the mysterious and the exotic.  Traditional values were rejected if they hindered a person’s ability to express his individuality and emotions.  Rigorous academic training were not deemed as important as an artist’s individual creativity and personal spiritual awakening.  The ideas in the movement that involved creating intentional associations in people’s minds when viewing a painting would prove to be very influential as Symbolism, Surrealism, and Expressionism developed in the years to come. 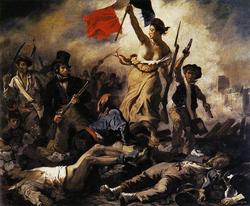 Two paintings by the French artist, Eugene Delacroix. His passion for the exotic has a profound impact on the development of the Symbolist movement.