A design, architecture and art school begun in 1919 in Germany.  Its style centered around geometric efficient design and a stress on the significance of the materials used in the art created.  Walter Gropius was the catalyst of the movment; he was made the head of two art schools in Weimar which he combined to create the Bauhaus.  The school focused on teaching practical craftsmanship and creating good designs that had the potential to be mass-produced.  The school moved a couple of times; in 1933 the school was shutdown by the Nazis.  The school continues to play an influential role in art today, whether it be typography, weaving, furniture or architecture.  Key figures from the school include Marcel Breuer, Paul Klee, Lyonel Feininger, Wassily Kandinsky, and Laszlo Moholy-Nagy.

Two examples of furniture influenced by the Bauhaus school. 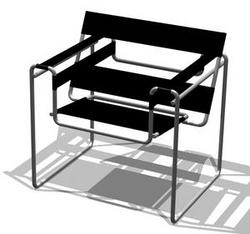