The Renaissance is an art movement that emerged in Italy in the 1300s.  The term means, “rebirth” and relates to the development of interest in the past Classical feats in the arts.  The Renaissance was a time period that marked the moving away from the Middle Ages focus on religious artworks to focus on the state of the significance of mankind in society.  The creativity of the individual came into the forefront and experiences became main themes through the period’s artwork. As political stability grew in Italy, as well as the economy and thus cosmopolitanism, several changes took effect.  Education started to flourish, which encouraged the proliferation of libraries and academies.  As the economy grew, so did the arts.  Affluent persons became patrons of artists, such as the Medici family of Florence, Pope Julius II, Pope Leo X, and the Sforza family of Milan.  Interest grew in relation to the intellectual values of the Classical world.

One significant artist of this time period was Leonardo da Vinci.  He is often viewed as the archetypal figure in regard to the progressions made in literature, science and art made during the Renaissance.   Several of the famous artists of the Renaissance came from Florence; the city continued to be a significant location for the developments made during the period well into the 1500s.  The ideas of the Renaissance spread into Europe and began to affect some of the ideas in those countries.  One artist who was very much influenced by the period was Albrecht Durer from Germany.  He was a fine draftsman and became one of the many artists of the “Northern Renaissance.”  Over time, the art movement of Mannerism replaced the Renaissance; this movement had greater impact on influencing the style of the arts in the other European countries.  Important artists of the Renaissance include: Leonardo da Vinci
Sandro Botticelli, Raphael, Titian and Michelangelo Buonarroti.

A close up of the Sistine Chapel by Michelangelo di Lodovico Buonarroti Simoni's artwork. He was a painter, poet, architect and sculptor. The Sistine Chapel fresco is one of his most famous works. 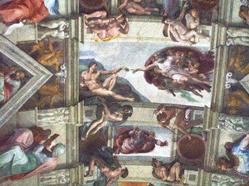 A bigger shot of the Sistine Chapel fresco.