(1920s-1930s)  Surrealism was both a art and literary movement that stressed the significance of letting one’s imagination rule through the use of the sub-conscious without the hindrances of logic and normal standards.  The anti-rationalist characteristic that stemmed from the Dadaist movement was a part of Surrealism.  However, Surrealism involved more playful and spontaneous in spirit.  Ways of thinking about how a viewer perceives the world around himself helped to shape the movement.  The movement was begun in 1924 in the city Paris by Andre Breton, the author of the ‘Manifeste du surrealisme.’  His writings encouraged the expression of one’s imagination through the use of dreams.  His writings attracted many artists of the Dadaist movement.  The Surrealist movement was helped along in its development during the 1920s and 1930s with the famous artist Salvador Dali.  He, along with the other movement’s artists, stressed using the subconscious part of the brain to provide the content for the imagery.  The artists used a realistic style to paint their irrational images.  Sigmund Freud and Carl Jung, men who developed psychoanalytical theories, played a profound influence on the movement’s development.  And techniques such as automatism (free association) assisted the artists to put their theories into play in order to get their sub-conscious to become reality in their paintings and literary works.  Artists who used automatism to help create their work were called Absolute Surrealists.  And artists who focused on making connections amongst material and abstract forms were called Veristic Surrealists.  Their aim was to manipulate objects from reality into their paintings, as opposed to the Absolute Surrealists who tried to create imagery from their own minds.  The Surrealist movement had a big impact on the later movements of Magic Realism and Abstract Expressionism.  Moreover, the movement encouraged the idea of maintaining expressive thought in one’s artwork.  Key artists of the movement include: Marcel Duchamp, Georgia O'Keeffe, Max Ernst, Sir Henry Moore, Rene Magritte, Joan Miro, Salvador Dali, Pablo Picass, Man Ray, Dorothea Tanning, and MC Escher.
. 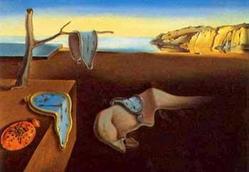